I think it would be nice to show the values of node input on the ide when they are defined in the inspector. Would be even better to have them in gray if default, and some colors if user-overriden.

For example, the uart node could show the defined baudrate (could be with a very small font). So user don’t have to click and open the inspector. Also it gives a better overview of what a program is doing.

If it has been discussed ad nauseam let me know and sorry in advance:-) If you see potential, I can at least draw a mockup to make it clearer.

Yes, there is a plan of doing so. I can’t tell you when we’ll done it exactly, but here is a mockup: 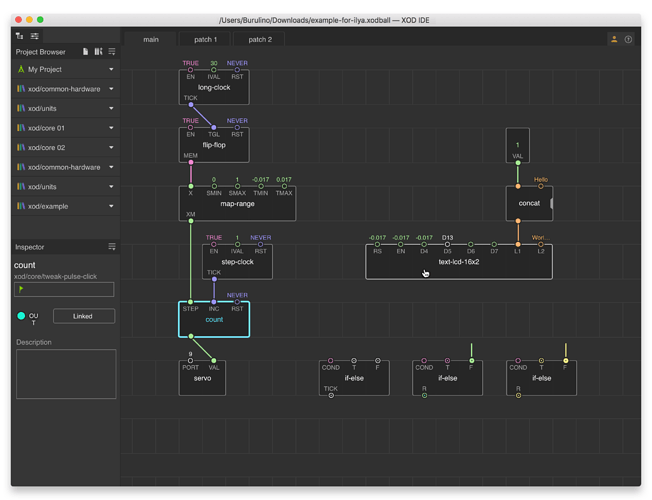 This was a very hard task for our designer. We have tried several variants with labels/values, inside/outside, gray/colored, etc.

The one I present involves stretching the grid horizontally ~20% but keeps the vertical rhythm the same. Nodes are taller because the new grid sacrifices some inter-row space to make the nodes bigger.

So, if you asked… What do you and the community think about the image: hot or not?

I like it. Especially for posting small patches to the forum. I really like pin labels inside the boxes; less clutter dealing with wires between nodes. The only down-side I can think of is it will make larger patches even harder to work with.

I don’t suppose you would want to make displaying values an option that can be toggled and make nodes narrower when turned off? Probably a lot of work for a 20% gain in workspace…

I really like it! It’s really cool to see that each time I have a suggestion, you are already working on it. Thank you that.

A zoom in / zoom out feature could help for the larger patches, but really the loss of space will probably be a minor annoyance.

Zoom feature is some help with larger patches, but text shrinks as you zoom out, making it harder to work on details. Even with 20% smaller nodes, you will run into this same issue, but you can fit a few more nodes in before hitting that wall.

I still think in general, it would be better to have the extra info in the workspace…just wanted to toss in the possibility of making it a toggle option. I don’t have much hope for it being worth the trouble…

Yes, the program density is the main curse in visual programming, but we failed to produce a mockup without touching the grid. There were many attempts.

I’d like to avoid UI modality as much as we can. So toggling labels/values on and off with keybindings does not sound like a good idea. It is not intuitive enough IMO.

But let me elaborate your ideas about zoom? What if the normal zoom level is the one shown on the image. Then, if I zoom out the patch it does not scale as is uniformly, but rather it hides pin labels and values keeping node labels the same in absolute font size. The space gained by hiding pin info should be enough to make node outlines smaller… In other words, zooming out can hide some details completely in favor of keeping other details readable. Does it make sense?

I wasn’t even thinking about keybindings to toggle pin values…it could just be a menu option. Most likely, individuals will tend to have it always on or always off. Adding/dropping info from the screen probably isn’t something that needs to be done quickly…it would be OK if it required a couple clicks.

Having zoom add/drop information might be a solution, but it has its problems. Think about someone visually impaired who wants to make the text bigger, but not take up the whole screen with pin values.

To carry the idea farther, if you want to zoom way out but still be able to read node labels, you might drop pin labels to leave more room for node label so its text can be larger. Auto-dropping info at specific zoom levels would make it seem very arbitrary, but adding a View > Toggle info section to the menu to manually select which info to drop gives the most flexibility. Unfortunately, it is also the hardest to implement since it allows multiple combinations…

There may be two “gauges” of zoom.

That might work. With only 2 data-points (pin values & pin labels) it seems pretty obvious what the order should be. But if more data-points are added later, order to add/drop info might be less clear.