How to slow down refresh rate of a LCD

I need to slow down the refresh rate of a LCD

Currently, LCD nodes are implemented to refresh as soon as a new value comes in. If you are outputting numbers, you can use buffer node to slow down the rate of incoming values(if not, I can make you buffer nodes for other data types). Or limit it “higher up”. For example, if you are displaying value from analog input, update it less often(link clock node set do desired rate to UPD pin).

Could you please provide a more concrete example of what you are trying to do?

Thanks for responding :D, but I found a solution, I put a 600 delay on the void loop of the XOD code. Can you explain me how to use the thinks you are explaining to me? Where I put the buffer? Here is a screenshot 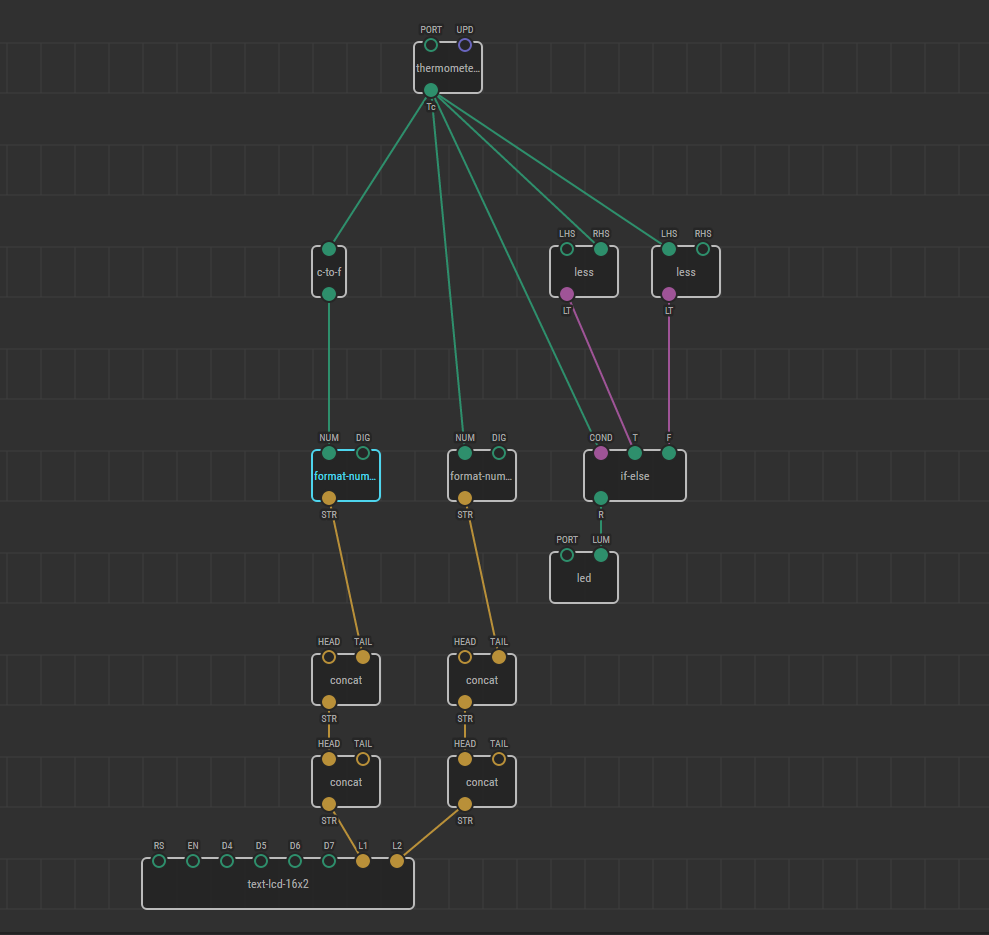 Thanks for responding :D, but I found a solution, I put a 600 delay on the void loop of the XOD code. Can you explain me how to use the thinks you are explaining to me? Where I put the buffer? Here is a screenshot

Hmmm. For some weird reason, your reply was totally invisible until couple of hours ago.
Sorry for the late response😁

@gweimer already described an optimal solution for the example you provided👍🏻 Here is a relevant part of the docs that explains it a bit further: https://xod.io/docs/tutorial/21-pulses/

The alternative solutions with buffers that I mentioned in my first reply will look like this: 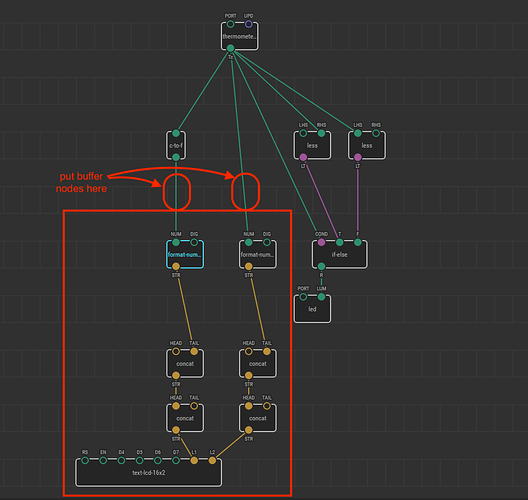 Captura.png989×935 50.1 KB
That way everything in the red rectangle will be “protected” by buffer nodes and will update with limited rate, while everything outside will function like before.
gweimer February 16, 2018, 6:28pm #7

The down-side of using buffers for just the LCD in this case is that your LED might be changing state, but LCD is not going to be showing WHY it is updating…could be very confusing… You could insert the buffer just below the sensor and run everything to the buffer instead of the sensor. Either way, the buffer still needs a pulse to tell it when to update, so why not just run the pulse to the thermometer patch instead? The only reason I can think of to use buffer here would be to have the LED and LCD refresh at different rates, but I think that only leads to confusion in this case.

Yes, I agree. This is not a very good solution for this particular case