Just noticed this with the new version, I don’t know if it’s specific to 0.17.1 but I hadn’t noticed it before. Create a new project named “test”, create a patch named “foo”, drag a “not-implemented-in-xod” node containing the “no operation” code template into the “foo” box. Switch back to main, drag a copy of “foo” into main and attempt to transpile. Produces the following error: 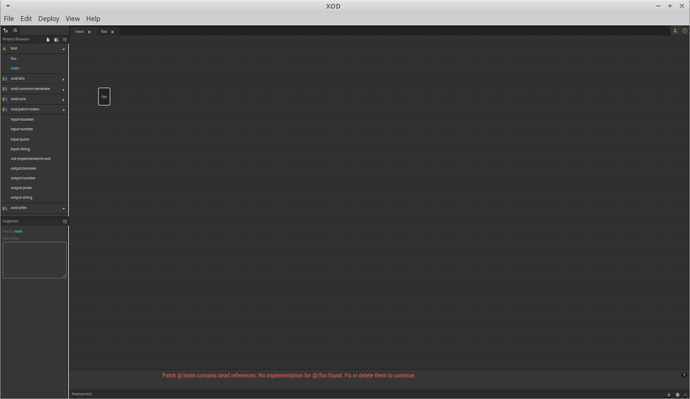 Switch back and go into the “not-implemented-in-xod” node in “foo”. Uncomment the first comment line, then comment it again (don’t need to save anything.) Switch back to main and attempt again. Generation proceeds OK.

Thanks for the bug report!

BTW, what the ugly white bars I see on the sidebar? Do you see them permanently? If so, do you have 100% zoom or the UI is zoomed in?

Ah, I didn’t really notice that but no, they seem like they’re there permanently regardless of zoom settings. It looks that way immediately after program start, that is to say. Not visible when the window is maximized, however.

The screenshot is not edited or cropped in any way it’s a direct capture of the window with Alt + PrintScr then save as file. OS is Linux Xubuntu 16.04, XOD installed from .deb package

I see. I think that’s left edge of scrollbars we’re trying to hide so that we can use our own (which match dark UI design). For some reason, your system has wider native scrollbars and we can see a piece of them. Will try to offset them few pixels more.