xod scales the analog values from zero to one (0-1), hence the called value

It was a design decision. IDE uses 0-1023 for analog read & 0-255 for analog write. XOD used 0-1 for both, so you can feed the output from reading a POT straight into an LED node to control brightness. While IDE uses integers for analog values, XOD is using float, so 0.5 would be 1/2 of the potential value (equivalent to 512 for IDE read or 128 for IDE write).

If you look at help for the nodes, it will tell you the expected input/output ranges. For analog-read: output pin VAL (a number) The latest read value in range 0.0 … 1.0

While you could convert XOD numbers to match the IDE values, it doesn’t make much sense to do so if you are feeding the values back into other XOD nodes.

The next closest value would be 0.19, which is further away from the actual, many digit decimal value, reported by Google as 0.18377321603. It actually repeats as all fractions do. (after 30 digits)

Here is the explanation

ARDUINO sensors and ADC inputs produce a 0-1023 range of numbers. XOD is not so. This is by-design. The context-free range from 0.0 to 1.0 seems like a more natural choice. In Arduino you have to map between 0-1023 (0-4095 on some boards) and 0-255 quite often, and the ranges themselves could look quite odd if you’re not familiar with bits and bytes. 0-1 range should make many nodes directly compatible without any mappings I’ve tried a simple patch: [image] With a potentiometer on analo… 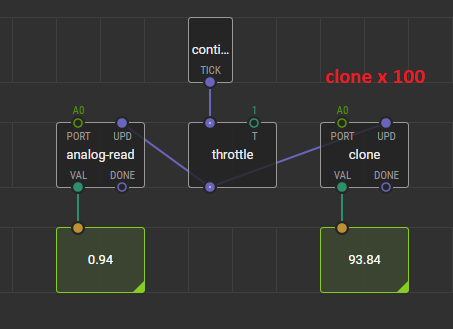 Sorry @cesars, I didn’t make my point clear. I’m not suggesting that converting to a float between zero and one is a bad idea, in fact I think it’s a good idea and does make it easier to compare inputs and outputs without having to use the Arduino “map” command. What I was asking about it the resolution of the output. Two decimal points between 0 and 1 means a resolution of 100. However it appears from your example that the output value of the analog-read is displayed with two decimal points, but managed internally using at least four, which is shown when you multiply the value by 100. This gives a resolution of at least 10,000, which is more than enough for most applications.

So thanks for the clarification.

As that link shows the resolution of a float variable is quite huge and easily handles any digital output of ADC up to and exceeding 24bit (not sure we mere humans would be exposed to ADCs of higher res ). Regardless of the ability of float type to depict a much greater range than the ADC resolution, any value displayed can only be one of the possible bit values of that resolution. see -> https://spectrum-instrumentation.com/en/adc-and-resolution

.
I apologise in advance if I’ve covered ground you are familiar with but I just wanted to provide some background as I said previously for anyone following us