Temperature sensor AM2302 DHT22 not working

Hi,
I’m a XOD newbe and using version 0.22.0
Using a simple connection with the sensor AM2302. The Arduino sketch in the IDE is working fine and shows a correct temperature. A simple project in XOD does not work and show 0.00 °C. The wireing wasn’t changed.
What did I wrong in XOD? (The Data pin of the DHT22 is connected to D2)
Here the XOD project: 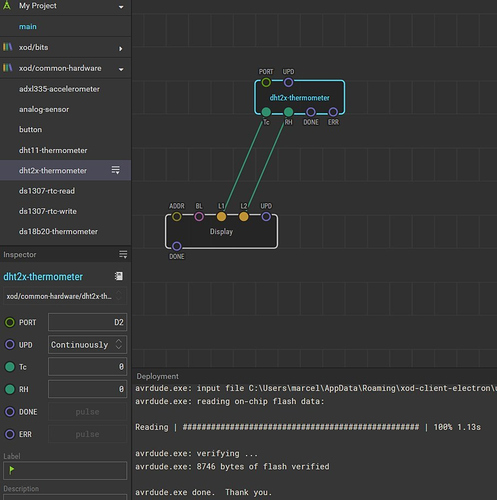 I’m not an expert,but I would try connect the ‘done’ output of the sensor to the ‘update’ input of the display

The hordware has only 3 connection pins: gnd, vcc and data.

Jeff was referring to the pins in the XOD patch. Since Display is probably defaulting to “continuously”, it probably won’t make a difference.

Do you have DHT22 by Seeed Studio? If so, we have a bug #1110 which we can’t reproduce. Looks like there are slight differences in DHT22’s and the one by Seeed is not handled correctly by the node.

I think it’s from keyes. The problem is similiar to bug #1110. I made an Arduino sketch in the IDE, I used the same devices (I2C LCD and DHT22 and used the same port (D2) en it’s working fine with the sketch

With XOD the lcd gives for both temp and humidity a value of 0.00

I also, as test, disconnected the data wire and both readings were the same: 0.00

So I think XOD is not accessing the DHT correctly.

This is a photo of the DHT I used: 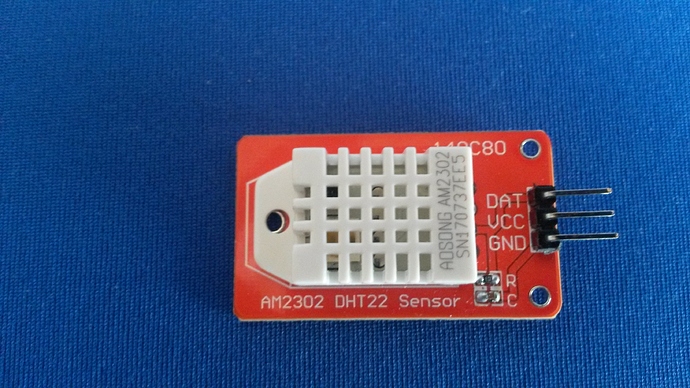 Thank you so much for the help After trying many patches i did find that a dht11 and ds18b20 also would not work until i hooked them to d8 and 9 and gave them a 1 hz tick on update line
They do not work on the lower pwm pins.