Yes, some people report problems with DHT11 and I²C LCD working together. What board model do you use: Uno, Mega 2560, whatever?

Also, what model of DHT11 do you have? Can you see any values using watch’es?

This is what i have on watch in debug mode: 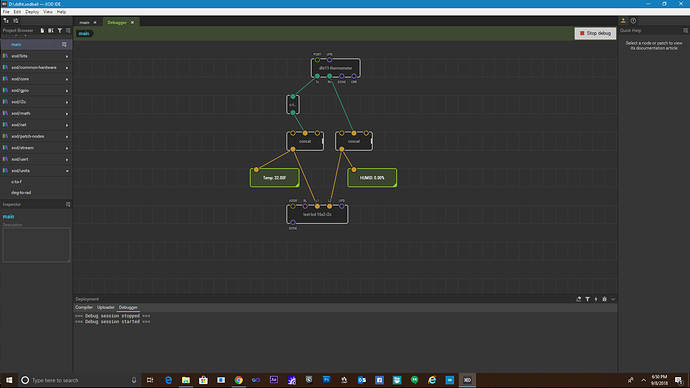 nkrkv, yes its an UNO R3… I have a DHT22 on order. Since it’s more accurate i will be ditching the dht11 for the 22… In the mean time i have been going over the c code for the dht11/22 to see if there was an error and i might just create from scratch a new node for my dht going by the data sheet i downloaded…

I am assuming no one came up with a solution to this problem?
Just started using XOD and already have the exact same problem.

Hello! Indeed, DHTxx fails in XOD with some hardware combos. @evgenykochetkov recently found the root cause and fixed this bug in the master branch. Expect a new XOD release with the fix included in the nearest day or two.

My DHT11 shows the right values but needs an additional clock pulse to work.

Am I understand correctly? The sensor does not read properly if UPD is left with the default “Continuously” value?

Yes.
I have connected a DHT11 to a Uno-Clone during lunchtime for a test at my workbench.
Continuously shows only 0.00 in the watch node.
When I use a a clock as trigger everything works fine.