I have two watch nodes attached one to Tc and one to RH they will flash between ERR and very briefly a number Tc 25.0 and RH 34 which I interpret are the Temp and humidity respectively temp is in C.

The dht11-hygrometer node perimeter box turns red and the text in the watch nodes is also red. 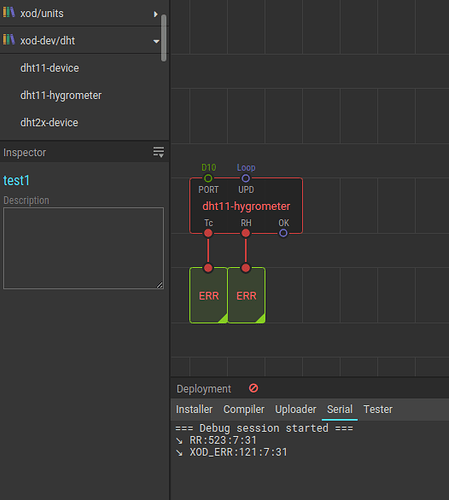 Some sensors need time to recover between checks you could try connecting clock to the UPD pin to update every second instead of setting it to loop.

when I added the clock it would alternate flashing with ERR and the dht node boarder in red for 1 second and then white with the actual temp and RH for 1 second. clock IVAL is 1.

I placed the sensor in my hand and then the ERR stopped and the readings changed. Then I put the sensor down and after a bit the ERR began again.

I purchased a “Geekstory Micro SD Card Module Mini TF Card Adapter Reader Module and Write Module with SPI Interface Driver Module + 40pcs Female to Male Dupont Cable Line for Arduino (Pack of 5pcs with Cables)” from amazon so far not able to get it to work any suggestions where I can read up on making this work in XOD.

Have you connected the 10k resistor?

no. Didn’t know that it needed one for a dht11.

Where does it go? Between the output and the Arduino?

if the input does not have pull-up I think it needs it, it goes in vcc and data pin a 10k resistor

I will try that