Hi guys, can someone explain how to connect digital write to delay or clock? I need, that would RGB tape about was included on some interval time, and then turned off, help please. (I tried this on the Arduino IDE relay and the tape itself works fine)

Depends what you are actually trying to do. A simple example is to have it flash in 1-second intervals. 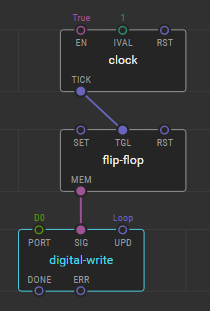 An alternate method could be used to generate a pseudo-random flash. This turns the pin off every 3 seconds and on every 5 seconds. Since there are two nodes controlling the same pin, we need to control the UPD pin instead of just leaving them in Loop mode so that only one node controls the pin at any time. 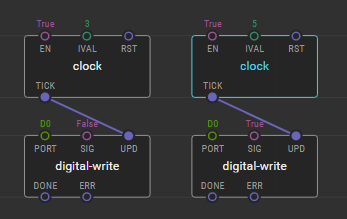 In general, it is “safer” to only have one node controlling a single pin and change the node input to change the pin value, but if you are careful to make sure only one node controls the pin at a time, you can have multiple nodes for a single pin. Multiple nodes for a single pin does NOT work with things like servo node that has to continuously update the pin value; you either need to limit your program to one servo node per pin, or use an enhanced servo node that can be disabled. (Note that having a patch in your program multiple times when that patch includes a servo node is the same as having multiple servo nodes.)