I am looking at making the reverse of a motion alarm. I need a no motion alarm. I will be watching a slowish moving machine. If it stops moving for 3 seconds or detects a fire, it kills power to the machine via a relay, sets off a buzzer (that I can turn off), turns on an led, and possibly notify me some how (not essential but would be cool).

I am not 100% sure what is the best way to go about watching for motion. I was trying to avoid putting anything on the machine if I can. If not it can be done just will have have to run 5 or 6’ of cable. What would be the best but still fairly simple Pir, ultrasonic, accelerometer, vibration? I am only looking for movement primary and flame secondary.

I was having a hard time figuring out the software because it is missing so many basic parts. I get that several will probably be identical to something in there but would make it so much easier for people new to the program.

Thanks for any help

An option may be to place a TIMER and compare, if it is greater the alarm is activated. PIR motion detections will reset the timer.

Yes, but what is a PIR? I don’t know what it is in the software. I think I am going to try and use a ultrasonic detector if I can figure out the coding.

but what is a PIR?

Living beings release heat and the same happens with cars and any other machinery, and that heat is emitted in the form of infrared radiation that we can detect with the appropriate devices, such as PIR sensors. 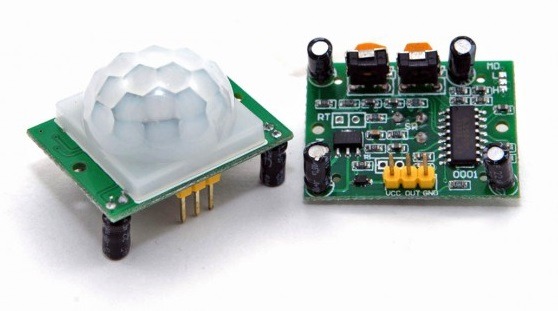 Otherwise you can use sensors of vibrations movements etc. a combination of all 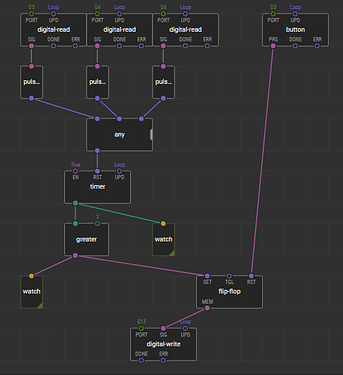 An ultrasonic detector is for measuring distance. It will only work as a motion detector if you can be sure the motion will be toward or away from you. PIR (Passive InfraRed) will detector changes in heat (like side to side motion of an object that emits [or blocks] heat)

I was talking about what is it in the xod. What block is it? I tried a digital read and it didn’t work. I was just doing something simple but it might be wired wrong because I don’t have a pinout for this version of pir. It is a flamengoeda which their website is gone. I was just trying something simple like light up led on motion and couldn’t get that to work.

“An ultrasonic detector is for measuring distance. It will only work as a motion detector if you can be sure the motion will be toward or away from you. PIR (Passive InfraRed) will detector changes in heat (like side to side motion of an object that emits [or blocks] heat)”

I was worried about the delayed start time of the pir and I am not sure it will see the motion of the machine. I can mount a small IR LED on top of the machine to act as a beacon of sorts.

Cesars I was able to get some basic stuff working with the help of your sketch. My pir was wired wrong but in my defense there are no markings as to what is what and their website is gone.

I am seeing some odd things from the pir. Right now I am just having the pir light up an led as long as it sees motion and turns off after not seeing movement for 5 seconds. So what happens is you wave your hand in one direction, it triggers, 2 seconds later it triggers again, 3 seconds later it triggers again, then the led turns off after 5 seconds. So it takes 10 seconds for the 5 second timer.

I do not know what hardware you are using, and what is the patch. The my example will be activated if a pulse arrives before 3sec and will only be restored if you press the button

Thanks for your help Cesars. From what i can tell the PIR seems to have a wider FOV than I thought and was picking up me moving my head. I will probably just tape off a little to close down the FOV.

From what you posted I have the led, both relays, and button working. Most of all I am starting to get a grasp on how this program works.