The problem: What if we need the result of BOTH of 2 asynchronous operations (e.g. xod-dev/esp8266-mcu/connect and xod/common-hardware/dht2x-thermometer), so we can perform a 3rd operation (LED, Servo, radio-write, etc).

While I2C (and other */read-byte nodes) are not currently asynchronous, a few others are, including delay.

As far as I can tell, there is no join-pulses (wait-for-all-pulses, etc.) node.

Here is a contrived example of 2 asynchronous operations, with a 3rd that wants to use BOTH results.

I put an any node where a join should be, to show what we would need. 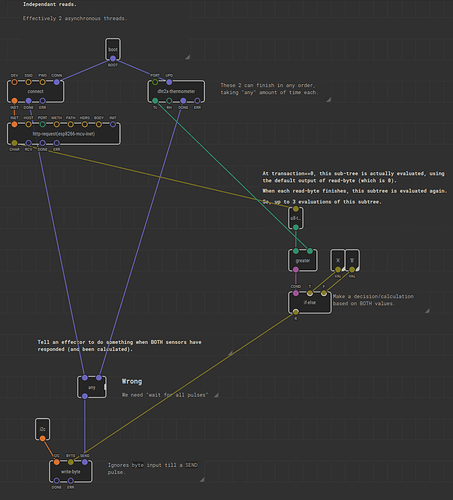 Also, here’s the project need-join.xodball (9.1 KB)
because it might be easier to see if you open it in XOD.

The join would fire a pulse (and reset) only when ALL input pulses have (eventually) fired. It only counts the first pulse on a particular input, until reset. I imagine using bits to hold each signal, and when all are set, fire the output pulse and clear the bits. Of course that might limit the number of inputs to 32 or 64.

Yes, such nodes would be very handy. Could you think about exact variations necessary? Beside the join-pulses which works like:

This one might be useful for cases when “I want this stuff to happen only after ESP is initialized”:

Both nodes should provide an RST pin as well to reset to the initial state.

Could you think about exact variations necessary?

first-pulse is a complement: pulse on the first input in the set, wait for reset to do it again. i.e. “first through gate”. For the examples below, which are complex, probably simpler versions without all enable or once, etc. Otherwise, I have not thought much! Anyone else?

“kitchen sink” version. All the controls. ENABLE seemed like an idea? Or is that a bad mixing of pure/impure? 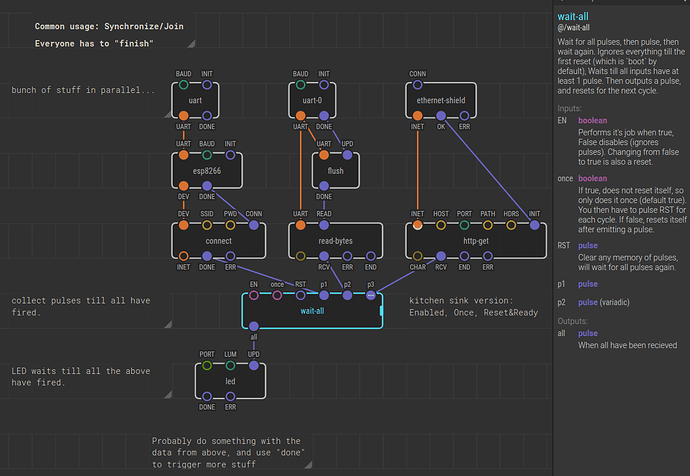 Same, but only waits once after a SET: i.e. start waiting on SET. 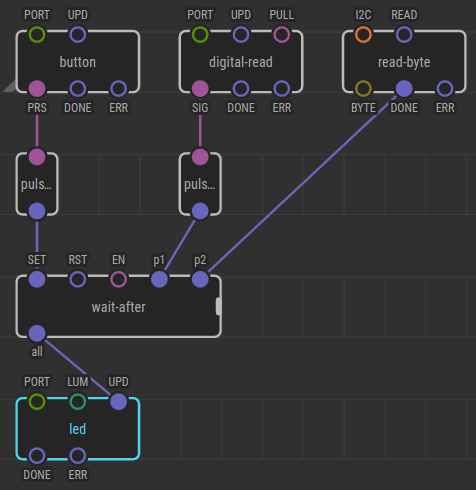 If you send continuously to RST, then all pulses must arrive in one transaction! If you use a delay you can require all pulses to arrive within a time-window (looks like we need a first-pulse node!)

I don’t know how to use variadic input-pins with .cpp. Will have to look for an example. I don’t know when I’ll work on this.

The fundamental nodes are :

A couple of “helper” nodes:

I’m thinking that set should be called step, because it means “do one”.

The above helped me think through the possible primitives, then I realized I could implement set-bits (called parallel-to-serial above), and thus wait-all in pure xod.

I didn’t turn wait-all into a reusable node, I just made an example patch so far.

Does efficiency concerns warrant turning this into .cpp?

Does efficiency concerns warrant turning this into .cpp?

I think it is OK until otherwise becomes obvious.