I’m pretty new to using XOD and programming my Arduino. I’ve been trying to build a code-lock. Plan is to have four rocker-switches that have to be switched (input pin to Low) in a particular order to open a lock (output signal High). In my workspace in XOD I have placed four switches, but I can’t wrap my head around what to do next, what nodes I should select and how to connect them. So much nodes to choose from and I’m not sure how every node functions and what input/output they require. Did the tutorial on how to use switches, but how to combine them to do what I want…

Every help is welcome to get me started. Thanks in advance.

Although this sounds like it should be easy, this is not a trivial project. To start with, you need to be able to remember state so you can determine which Port should be activated next; I would probably use flip-flop nodes for that. The easiest process is to add another button to reset the system (or you can “cheat” and just use the first switch to do this). I’m sure there are other options, but I would probably add another flip-flop to remember if any switches were done out of order. Once you have all the flip-flops laid out, you need to work out how to write them together. One option is to have the reset clear all the flip-flops except the first one that gets set to indicate it is time for the first button. If the correct switch is flipped, then its flip-flop needs reset and the next one set. If a switch is flipped when it’s flip-flop is reset, then the flip-flop for error needs set so lock cannot open.

Even with this info to get you started, actual wiring will not be trivial. You will most likely need some and/or nodes, and perhaps if-else or gate nodes.

Thanks for your reply. I think I found a solution for this. I’ve been using the following nodes succesfully sofar;

Anyway, images say more than a thousand words, so look at attached image. You can see above configuration for just 3 switches. I’ve also added a structure that resets the ‘Accumulate-String’-node when one of the swiches is put back to Low or when the accumulated string is not equal to the ‘code’-string. I tried using the ‘FULL’-connection of the ‘Accumulated-String’-node to determine if all switches are High, but it only pulses when a fourth switch/character (which doesn’t exist) is tried to push into the node, so I had to add a ‘Count’-node to do this. I know, the entire structure may not be as lean as possible, but it works for me now. 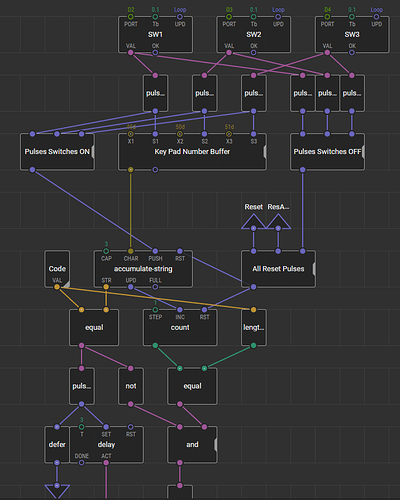 That sounds a lot simpler than my suggestion…