My personal wishes for new nodes:

Reasonable. Do you think the node should have a STEP parameter? In any case, even if the STEP is hard-coded to 1, what should happen if the lower limit is -1.5 and the upper limit is +1.5. The current value is 1, we pulse on INC… what the output value should be after that?

Yes, please. A STEP-parameter. Of course. I forgot to mention.
There is always a 74192 BCD-counter in my head…

“Clear screen” for the text-lcd-16x2 node

Serial Interface (with hardware handshake would be perfect

Test if in range:

Boolean output: in range / out of range.

You can build this out of standard nodes. in-range-nodes.xodball (6.6 KB)

But, it offends my sense of efficiency, because all the nodes will fire for each calculation (no short-circuiting). Is it good enough for you purposes? 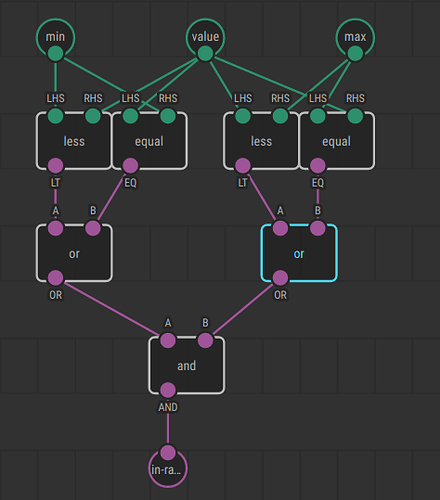 Added to my node lib as awg/logical/if-else-string

Added to my node lib as awg/hardware/digital-input. But, not tested with actual hardware yet!

Added awg/logical/string-compare to my library of nodes. Compares 2 strings, has 3 outputs: less, eq, greater. Only one output will go true. Recalculates if any input changes. https://github.com/awgrover/xod_lib

This likely doesn’t work all the time. It looks like the strings in XOD may have some bugs, but maybe the bug only happens when you “concatenate” strings.

Hello awgrover,
thanks for the new nodes! I have tested if-else-string an it works fine. digital–input is not tested yet, because it is late and my soldering iron is far away. At this time hardware has pull-ups.

Yes, test-if-in-range can be done by standard nodes. Did this patch use more memory than a standard node from the library?

Yes, test-if-in-range can be done by standard nodes. Did this patch use more memory than a standard node from the library?

I don’t understand. Do you mean by “standard node” something build in c++ rather than built out of other nodes? Then, yes, it uses a lot more memory, and is a lot slower.

I don’t understand. Do you mean by “standard node” something build in c++ rather than built out of other nodes? Then, yes, it uses a lot more memory, and is a lot slower.

Some nodes come with XOD IDE by default (in the folder xod/ in the menu on the left). I think more memory is used when I create a new patch made with these standard nodes from the menu instead of using a node from this menu which is “ready to use”. Even if the have absolutely the same function.

Patch nodes are created in XOD itself by composing existing nodes (no matter which ones). The test-if-in-range by @awgrover is a patch node.

Native nodes are implemented in C++ from scratch and, yes, they’re more resource-efficient than patch nodes because they skip cross-node communication overhead. Although it’s likely always would be a penalty for patch nodes, we strive to make the difference as low as possible. @awgrover have native nodes in his library as well.

Nodes are done by users. It doesn’t matter whereas they are native or patch nodes, they belong to someone. The standard nodes are simply nodes by the user xod. It doesn’t affect efficiency anyhow.

BTW. Node requests are very reasonable. We’ll do it. For now, you can do what you need by yourself or use other’s nodes.

Wish for nodes:
like “nth-number-x” but strings instead of numbers as in- and output

Added to my node lib as awg/hardware/digital-input. But, not tested with actual hardware yet!

Hello awgrover, I made a test with my arduino uno. The node works fine (tested on pins 2, 3, 8, 9). Thanks a lot for your support!

Added to my libs in github as awg/count/limited-counter.

The behavior is a bit complicated in the details:

You could probably make this out of cascading if-else-string’s. It may be interesting for you to think about. something like: 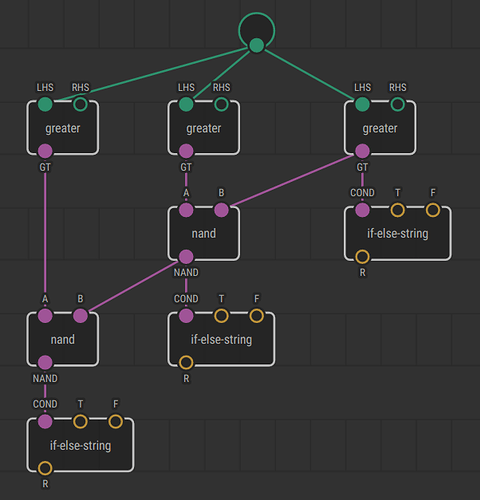 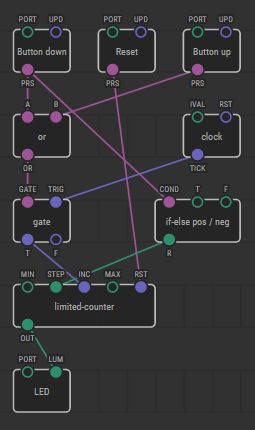 This counter-node is very versatile to use. Great work!

You could probably make this out of cascading if-else-string’s. It may be interesting for you to think about.

Yes, I made a few tests in the last days (cascading if-else and if-else-string nodes). I have some problems after uploading and debugging my project. I didn’t get an error message but debugging hangs and arduino will not work. Don’t know why. The project has lots of patch-nodes and after removing one third of the nodes the rest works fine. It takes also a lot of time until the upload screen (green timeline) appears. After removing some nodes upload starts faster. Perhaps my patch-nodes need too much of the resources? Because the project is in an early stage and im still plaing around, I will not upload it. Perhaps I will not need all the functions I have implemented yet. I have to think about it first.

You could probably make this out of cascading if-else-string’s.

I tried it this way:

In interaction with the whole project Arduino hangs after uploading. I used also a lot of patch nodes: 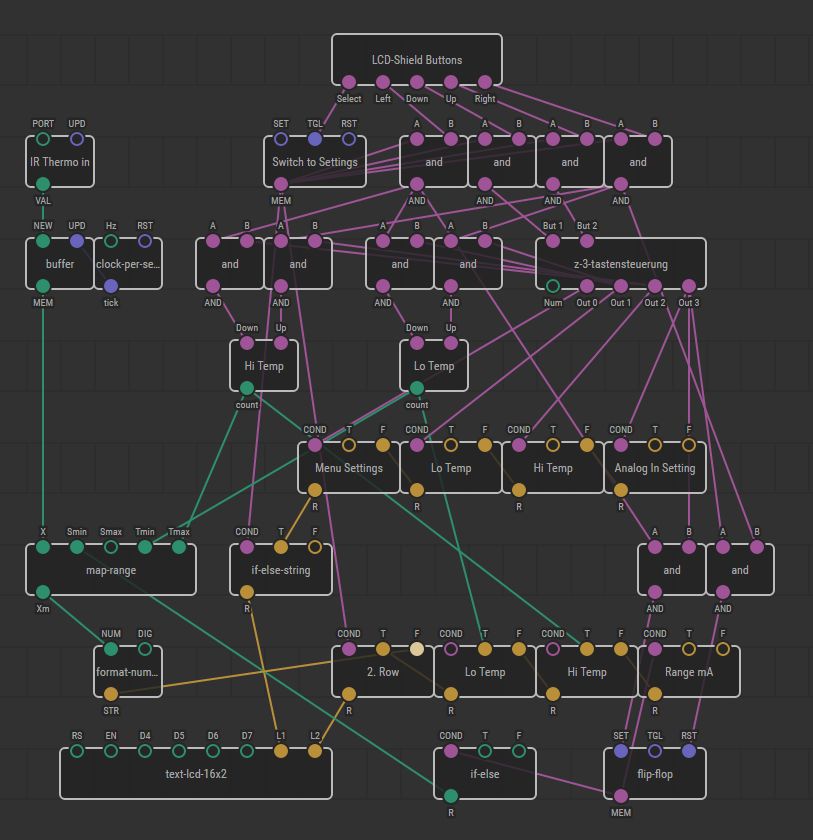 Perhaps the whole project was too complex. Now I tried it this way and it works: 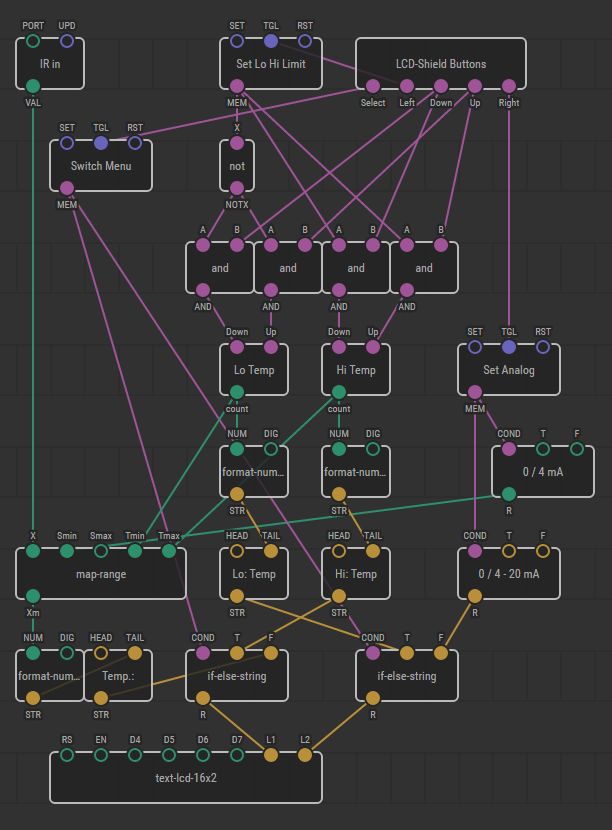 The whole thing reads the analog output of a HEITRONICS Infrared Thermometer. The value is send to the LCD. You can set the temperature range and the output from 0 - 20 mA to 4 - 20 mA. Perhaps there will be a more comfortable menu control (with incremental decoder?) in future and some more features (0 - 1 V / 0 - 10 V input, min. / max. Alarm, more acurate measurement with activated external reference voltage, over / underflow alarms, stored menu settings, temperature logging, ambient temperature and humidity readings…

Don’t be afraid if I will not write in the next time. I will be off for the next four weeks.