Hi, I have started using XOD, no problems at all on my Arduino Uno, but on the Nano, although the projects are compiling they are not uploading to the Nano.

This happens 10 times and then the process aborts.

The sketch code, if copied into the Arduino IDE and also uploaded to the Nano works fine.

Ideas and suggestions regarding what is going on would be greatly appreciated,

I had this problem just the other way around. With the new arduino IDE 1.8.6 I have to choose the “old bootloader” to upload directly from the IDE when I use the NANO.

Uploading from XOD was doing fine all the times.

Hmmm, it seems that if I just select Arduino Uno - even though the Nano is attached, that it works.

Something funky going on in there

With the new arduino IDE 1.8.6 I have to choose the “old bootloader” to upload directly

That’s interesting and can be the root cause… I can’t find anything similar in my Arduino IDE though. If I choose Arduino Nano and can switch between ATmega328/ATmega168 but see no option related to the old bootloader you’ve mentioned.

Where do you see the bootloader option?

Voila, here is the screenshot: 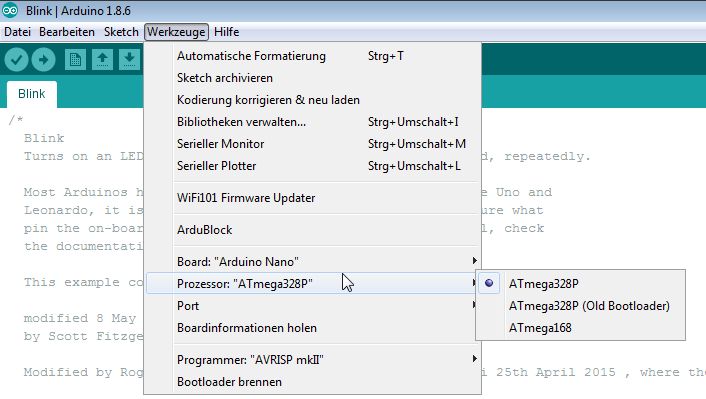 (Unfortunately it is the german version…)

Ok, folks, thank you for the feedback! With it, the root cause seems quite obvious. I’ve put an issue on the GitHub.

Long story short: @dox you have an older Nano, @m0iti you have a newer Nano. XOD can’t upload to newer Nanos directly yet. Arduino IDE can upload to both, a user has to choose his version.