First of all, I’m quite new here.
So forgive me when my questions are stupid haha.

Both of the switches going to 1 relay output.
( already made that. And it works)

But the thing is… When switch 2 is already active, and I press switch 1. It doesn’t " over rule". So, switch 1 is not fully working as a safety switch.

So what can I do, to makes this working.

I hope that my story is clear, and that you guys can help me! 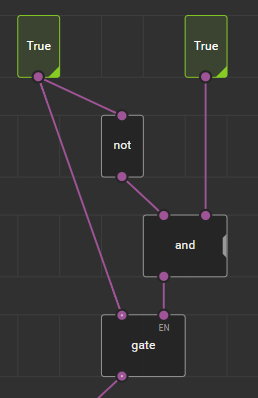 There are two problems with this.

I’m thinking we probably need a flip-flop to remember current relay state instead of just using logic to calculate it. We could use the gate code above (with delay node added), but I think we can do it more directly: 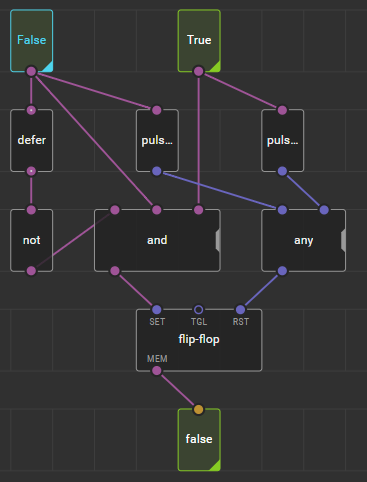 The “and” node says that we only have true when both switches are true and the command switch was off (“defer” of “not” of command switch). This will obviously not stay true for long since it goes back to false as soon as defer “expires”, but all we need is a quick pulse to set the flip-flop.

The puls… nodes are both pulse-on-false. If either switch is turned off, we immediately force the flip-flop (and hence the relay) to off.

There is one bug/feature with this code…it turns the relay on if both switches are on at power-up. Adding a delay that starts on boot seems to resolve this: 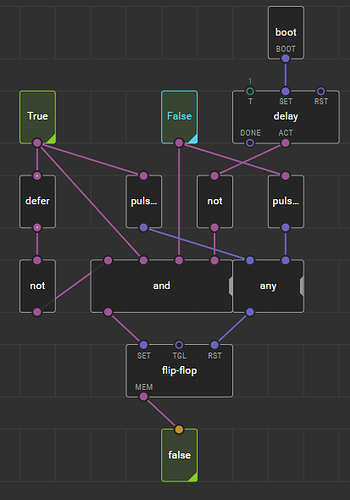 Now the delay timer needs to NOT be active before relay can be activated…in this case, at least 1 second after boot. If both switches are on when delay expires, we don’t have condition that command switch was off, so relay is not activated until command switch is turned off and back on.

My apologies for the late response! ( got a family thing)
You answer really helped me a lot, I’m quite new with XOD. But I’m learning fast, due the tutorials and the support from the forum. And it’s so much fun!

Anyhow, thank you again for you’re time, and clear/extensive answer. Keep up the good work!

( Sorry for my English it’s not my first language haha)