Using IDE 0.26.1 on 64 bit Windows 10
I selected NodeMCU 1.0 (ESP-12E) as my board
I tried the sample LED node, set the port to D1, set LUM = 1
It compiles, downloads without any error. NodeMCU led blinks during download as expected. 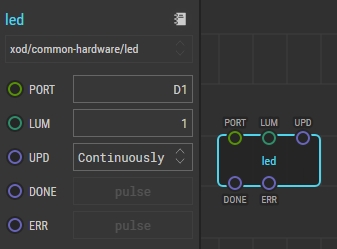 Nothing appears in the Serial monitor from the Arduino IDE.
Plain Arduino sketches run fine.

I attached a string constant-string node to a watch node, but I can’t work out how to observe a run time value, tried debug mode which opens a new tab in the IDE with a stop button, but I must be missing something… because I see nothing debug-like at all…

Double clicking on a watch node suggests it comprises an input pin and a “not implemented” node.

So how can we confirm that D1 = 5 ? Looked in the generated code but could not find it, but given that it could be constructed in different ways, I added a constant-string = “Fred”, but I cant find Fred in the generated code either. - This suggests to me that the project designed on screen in wholly unrelated to whatever code is being generated for me.

Bottom line is: I don’t seem to be able to get anything to work at all.

yup indeed, D5 does work for D1. I did suspect the classic port mapping issue but I was so intent on finding out what the value of D1 was, I did not think of simply trying D5 for D1.

I was fully expecting the defines for D0 - Dn to be properly mapped based on the board selected. OK

So if we can’t use direct pin numbers in the UI, can we get a number-to-port node?