Good Morning everybody,
I’m a Design student and just start to use the software/. I’m an early beginner.

I have a first PROTOTYPES of Smart Objets to render shortly and my system is not working. Let me explain: the initial position of my system is a pressed button that blinks a red led (like a fast heartbeat). When the button is released, the heart (led) continues to beat (blink), but gradually slows down for 5 sec. That’s all

It’s been several hours since I’ve been trying to get something but it’s not very conclusive.

If anyone can help me move forward on my project I would be very grateful!
Good day to all

Since you want to gradually slow the blink time, that would indicate you probably want to use a fade node. Since on button press you want to immediately go to fast blink, the rate for fade as well as the target needs to change. I suggest using two if-else nodes to specify those values based on button press. flip-n-times seems like the way to do the blink, except you do not want to limit to n times, so probably just a delay feeding a flip-flop for blink. Here is one option (note how delay auto-resets itself to continue the blinking): 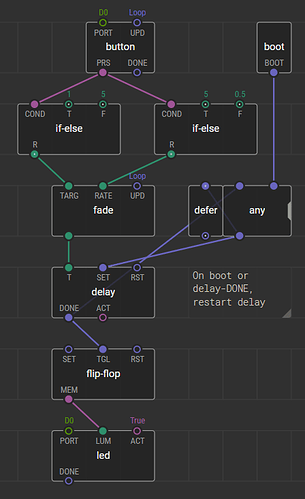