Equal node not working with decimal

I need to make a simple counter to increase a led light with every button click and then restart counter to 0.
The led works ok but when the counter node reaches 1, the equal node never returns TRUE 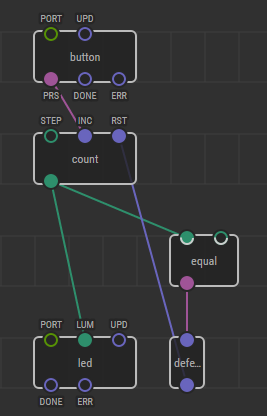 In such scenarios as yours better use greater instead of equal.

Yes i supose that. But will be any kind of solution in future ? Basically if XOD will be used to teach students to program their robots, boards … this could be a problem.

They will see a watch node showing 1.00, and the equal not working with 1.00 too

Shouldn’t the students learn that the computer math is not perfect?

It will be quite hard to do anything with equal which will not lead to ambiguities in other scenarios. I’m thinking about a node like almost-equal which will take a tolerance (with a sane default) as its input. Will it solve the problem, what do you think?

haha yes, but they could think. " If a computer math is not perfect …

Other solution, would be create a equal (decimal) node, and compare inputs once converted to string

Or in the same actual equal node, detect if second input is a decimal ( example: 1.00 ) to convert de first input to string like Wath node does

Every XOD pulse uses numbers in range 0.00 to 1.00 but the XOD developer has the last words of course

Or in the same actual equal node, detect if second input is a decimal ( example: 1.00 ) to convert de first input to string like Wath node does

That’s a very dangerous assumption. The system can’t be sure where the arguments came from and what tolerance is acceptable. Such algorithm will work in trivial cases but it will break many other cases.

Trying to find a balance between the reality of floating point and accessibility for a student’s mind… Perhaps, dropping the current equal for numbers in favor of one with tolerance = 1% (0.01) is not the worst idea.