I love it! I wish Wayland had more nodes. He made a complicated device easy to use. I can easily take data from a sensor and display it on my oled screen now because of him. I love his layout. I love all the options in his library for the screen. I love the examples he gave. I basically was able to learn the node just by the examples. THIS NODE IS THE BEST I’VE SEEN ON XOD(that’s not actually by XOD developers). WE NEED MORE OF THIS!

Hey Wayland if you want to go ahead and make a 433mhz radio transmitter and receiver node with awesome examples too. I would really appreciate it.

Mention @wayland to send him a notice

Hi uther2017, Many thanks for the feedback. It’s great to hear that you found my library easy to use. Most of the credit should go to the Adafruit team who developed the underlying Arduino library. I am hoping to have a play with radio over the next couple of months, so I will try to take a look at 433MHz transmitters and receivers. Have you tried the following library from @bradzilla84:
https://xod.io/libs/bradzilla84/433mhz-rcswitch/

Yeah. His node set up looks good but I have no clue how to figure out how to use his node. His examples he gave made me even more confused. I don’t know why he has a million watch nodes in his example. I cant tell what is even going on there. If there was simple example for the transmitter that was just a button and another simple example for the receiver that was just an led that lights up when it gets the signal from the button press than I would probably be able to figure out how to use it but right now Im just lost.

I’ve made a very basic library for working with 433MHz RF modules on Arduino:
https://xod.io/libs/wayland/433mhz-rf-module/

The functionality of the library is limited to sending and receiving messages as text strings, but this will be sufficient for simple remote control and wireless transmission of sensor data. I’ve tested it using cheap 433MHz RF modules I bought from Amazon: 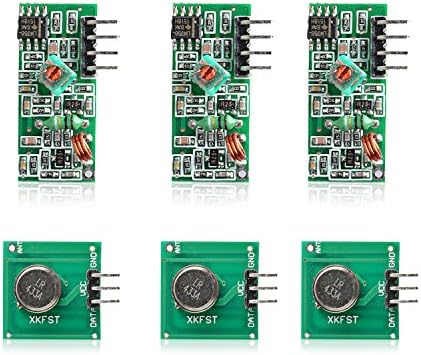 @dronebotworkshop provides a really informative tutorial on using 433MHz modules with Arduino, including advice on antenna design. The example patches in my library are based on the examples in the DroneBot Workshop tutorial.

Awesome! Thanks so much for creating the node. Cant wait to give it a try now!

It works! I can now send a text message to a LCD screen. You made that very easy! Thank You! One problem I have ran into though is that if I put in a text message that is shorter than the first text message then I can still see the ending of the longer first message that it received on the lcd screen. It’s probably my fault though. I need to figure out how to clear the screen when a new message is received. I feel like if I used your oled module and used the clear-display node in the setup it would work. I cant find a way to clear display on the simple lcd node that xod provides. I wish they would add that to the node module. Also how do I hook up a button or a potentiometer to the transmitter and use them to control something? Do I have to set it up to do things based on text messages received? Like if “x” button is pressed then print “x” on the transmitter. If “x” is received on the receiver than do this as a result. The result being what you would do if “x” text message was received. Understandable enough but how do we do this with potentiometers?

The first thing when sending the new message is to clear and then update the buffer, but it is not always so easy, in the case of having several data on the screen you should “erase” only that sector of the display or resend the data packet.

Many thanks for the feedback. The node 433-rf-receive has a buffer for storing the latest message received and I’d carelessly forgotten to clear it between messages. I’ve now fixed this issue and published an updated version of the library (0.0.2). A pair of new patches (example3-transmitter and example3-receiver) provide a test that the buffer has been cleared between messages. I’ll try to find time to put together a potentiometer example later today.

Sweet. Yeah the update fixed it! Thanks!

@uther2017 - thanks for confirming that the modified node worked for you. I’ve just published an updated version of my library (0.0.3). In this latest version you’ll find a new pair of patches (example4) demonstrating remote control of a dimmable LED using a potentiometer.

Awesome. I got the potentiometer to control the LED. You’re the best! What if I want to use more than one potentiometer? Do I connect the multiple potentiometers to a concat node and than connect it to MSG in the transmitter node like you did in example 2 for the sensor?

Yes, that should work. You may want feed the output from each potentiometer through a format-number node to control the precision (number of decimal places) and thus the length of the string transmitted.

Awesome. Thanks. This weekend I’m going to try and get a joystick to work with it