Hi there, I’ve got this LCD Troyks module Текстовый дисплей 16×2 (Troyka-модуль) / Купить в Москве и СПБ с доставкой по России / Амперка
and trying to get it to work. I’ve tried setting the address from the documentation where it says the lcd is listening on 0x3E - no results. I’ve also tried cesars/i2c-scanner patch, which results also in 0x3E address. Lastly, I’ve found a thread here (as of 2018 though) where nkrkv says the addresses should be in decimal rather than hexadecimal, so I’ve set it to 62d accordingly with zero result again.
However, the lcd remains dark. When patching with Arduino IDE it is fully functional, though. I’m patching Arduino Leonardo analog.
Any hint would be much appreciated!

Can you post the code you are trying to use? There are 2 different methods that can be used under xod-dev/text-lcd 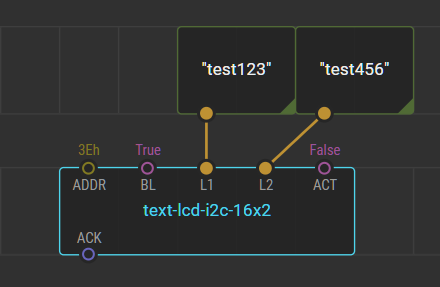 You have the ACT pin false, so the node is not active, so it never tries to update the LCD. You can change it to loop to update any time inputs change, or pulse the pin whenever you want it to update.

Thanks, I missed that. However, changing the pin to True doesn’t change the whole deal - the lcd won’t light up. So I’ve tried three addresses now - the original 0x3E (3Eh), the default 27h and 62d. No clue yet…

You can change it to loop to update any time inputs change, or pulse the pin whenever you want it to update.

In fact, it’s only TRUE or FALSE, there’s no loop option. And how do I pulse the boolean pin?

If you send a pulse to a boolean pin, it will be true briefly. In this case, long enough to update the display.

If it works with IDE, that implies LCD is wired correctly. Your Arduino model doesn’t support more than one I2C bus, does it?

From the datasheet I can tell that it’s a full Arduino Leonardo analogue, which implies it has one i2c bus and the shield I use can wire up to three i2c devices.

I don’t know what else to suggest, it has always worked for me, but I don’t think I’ve used it since the last XOD update. Maybe I can drag stuff out later to test again…

Thanks for your help!