Having some trouble with I2C MCP4725

hey Folks having some issues with

It works fine with just one Sparkfun MCP4725 Breakout but when I add a second one with the A0 pin going to High and resistors removed it stops working entirely.

correct Resistors were removed from the I2C on one board, does the board with the resistors have to be physically at the end of the circuit?

Hi, I really don’t know if this can work, but you could try 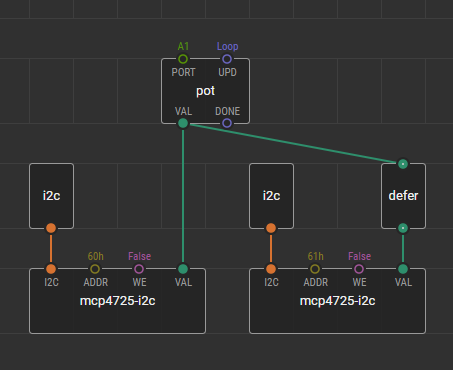 Yes, resistors should be at the end of the circuit.

Ok, So the Defer works, But it seems I have some possible noise as the signals are not consistent.

the MCP4725 Nodes flash red every so often.

But when both are at A1, both use the bus at the same time and it is blocked, so the defer delays one node.

Now A0 and A2 readings are in loop, it could update every a set time.

Can also set a time to A1, instead of a loop, you can use clock or throttle node.

Thanks a bunch! the Clock Node on A1 cleared everything up immediately! I guess it was sampling too fast.