Delay, how to delay?

hi, i’m interested before i could normally do a delay ignition like a diode, now it doesn’t work anymore ??

So when I pressed the button, it waited for say 5 seconds only then the diode came on … now I simply do not have this option? 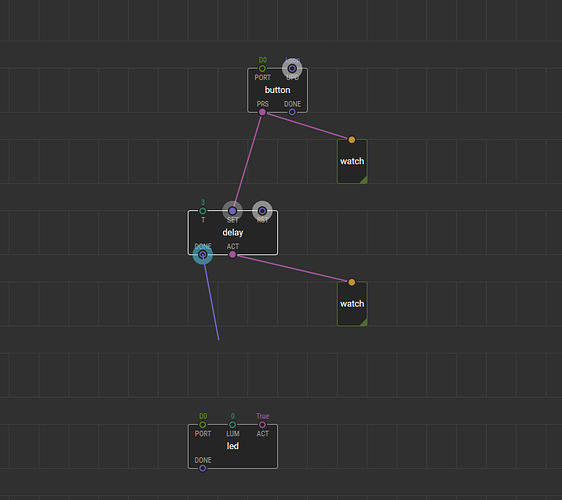 if i put two delays then it works for me for a while and i want it to work constantly? 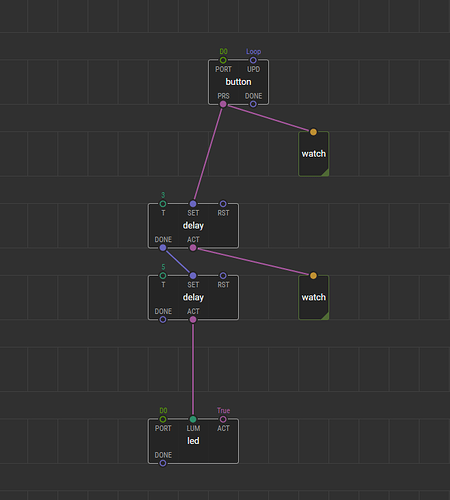 only this method works … 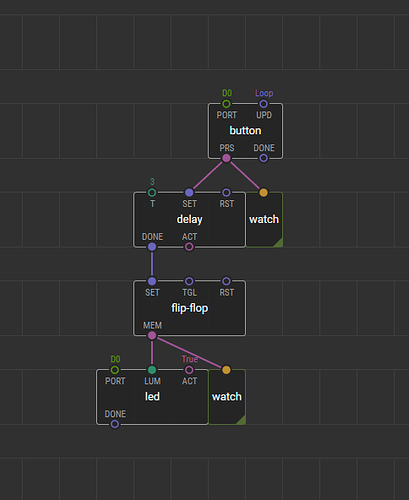 The delay node just send a pulse, so at best it will only flash the LED in your first example (probably faster than you could even see). In the second example, you tie the delay-ACT pin to led-LUM, so LED stays on as long as that delay node is active. Using the flip-flop node to remember the current LED state is probably what you really want (but maybe not… You don’t specify exactly what you are trying to do).

I wanted to light the diode, but at ignition I would like to have some delay, and at switching off the diode immediately turn off without delay, but that the diode is not limited but to operate constantly. I see that I can only solve this with a “flip flop” node, if I put only a delay then it is limited by seconds, and I’m still out when I turn off without a delay

You want something different to happen based on whether the LED is currently on or off, so you need to have actions based on state. Here is one way to do that using gates. If LED is on (i.e. STATE is true), then right gate will open & reset flip-flop as soon as button is pressed. If LED is off, then left gate will open and activate delay as soon as button is pressed & delay will set flip-flop when it completes. The defer node is needed because you are creating a loop running wires back to a higher point in the program. 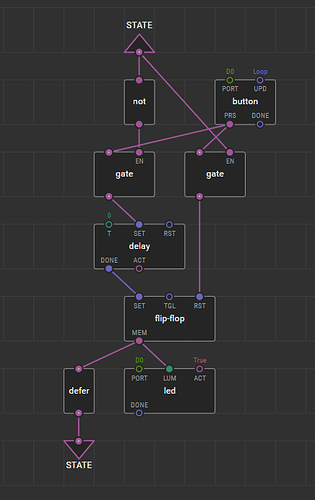 The triangles are ‘bus’ nodes (from-bus or to-bus). You can run the wire directly from the defer node to where the from-bus nodes connect instead of using bus nodes…it just means there will be wires running up through your other nodes, making things more cluttered.