If else LED blink

Hey.
I have simple LED and a gps receiver connected to my Mega. I want the LED to blink to while there are less than 4 satellites in view and illuminate while there are 4 or more. I manage to fo the first part and it indeed blinks but when I have more than for it wont illuminate because the if-else statement sends a False signal to the LED. What’s gonna be the best method to implement this case?

You don’t provide your code, so it is difficult to say how it should be fixed. If-else node will pass it’s inputs. Change the input to true (or 1).

OK. Managed to get it working but if GPS initilazes with more than 4 satellites, LED won’t illuminate at all. Only when it gets below 4 and then goes above 4 it will work steady. Any ideas?

Are you trying to turn LED off for <=2 satellites? This would be one option: 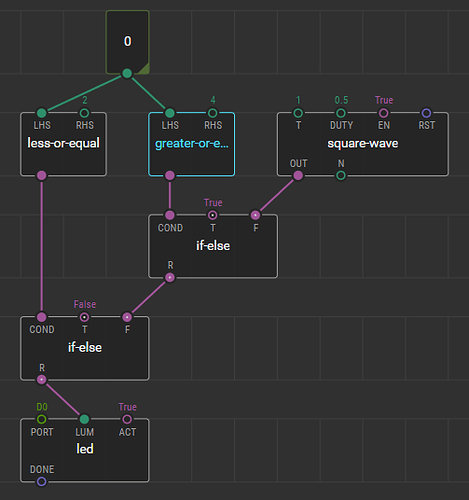 There are other wave nodes to generate different flash patterns. If output of wave node is numeric, change if-else inputs to 0 & 1 instead of false & true.

Thanks, buddy. I’ll test in in the next days and I’ll update whats going on.